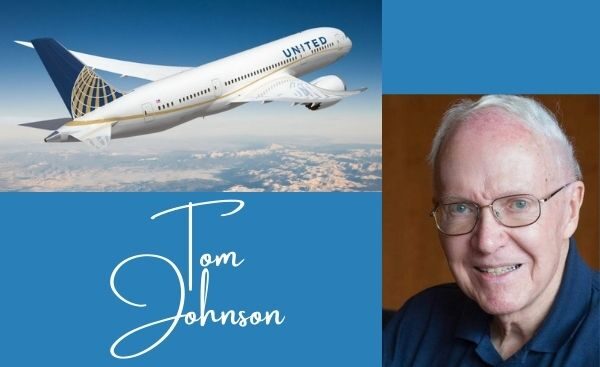 These are just a few words describing our featured FCAP volunteer for the month of June, Tom Johnson.  Here is what Tom shares about his life and involvement with FCAP:

“In my grade school and high school years in Akron, Ohio, Annabel, a Sunday School leader, and John, a leader of Altar Boys, were among the church adults who were (and this was important) especially encouraging and kind.  They were among the factors that kept me in church in my adolescent years and beyond.

My first year in Purdue University’s engineering classes proved too much and a counselor suggested Purdue’s two-year Aviation Technology program.  That led to a FAA A&P license and then to Utah State University’s similar program followed by Air Force Officer Training School and four years active duty as an Aeronautical Engineer.  While in the Air Force, I earned a private pilot license on my own.

As my Air Force commitment was ending I contacted American and interviewed at TWA and United for maintenance jobs.  In 1966 I started in a foreman training program at United Airlines’ SFO Maintenance Base.  Over the next 35 years I was a Maintenance Procedure Writer, a Staff Accountant in Maintenance Sales and finally a Supervisor in Maintenance Records and Control.  In my second year at United, a TWA Flight Attendant in my California church encouraged me to join her in a Bible study in a church close by.  It was there that I received a clear presentation of the Gospel that led to my salvation.  Around 1972 a United flight attendant, Joline Oberhelman, posted an announcement of a lunchtime Bible study where I soon heard of the FCAP.  This led to attendance at a weekly all-airline Bible study in the home of Barney Brogan, an American Airlines SFO crew scheduler, and his wife, Gina.

A FCAP West Coast Conference in May 1975 was the start of almost 30 years of active involvement that included the localFCAP SFO/OAK/SJC newsletter, West Coast Conferences, FCAP International Convention site evaluation and transportation planning.  At FCAP gatherings I became known as “Mr. OAG” as I used a pocket version of the Official Airline Guide to assist with helping attendees plan for their return flights home.

Being in a new and one-person job on 9/11/2001 resulted in my forced early retirement.  That opened the way to caring for people’s dogs and other pets in their homes during their travels and also to participation in Bible Study Fellowship (BSF), including ten years as a leader.  In the year of my retirement I moved to an inherited home in a new county and was searching for a church when Colleen Johnson, an American Flight Attendant who knew of my search, mentioned it to a jump seat partner.  The new church is wonderful!  This was the third redirect of my life through an airline FA … as important to me as pointing the way to an escape slide!  Praise to our wonderful Lord!”

All who have had the privilege of knowing Tom and spending time with him are blessed beyond measure.  Thank you, dear brother, for your faithfulness and encouragement over these many years.