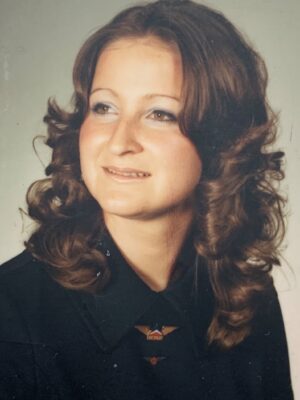 In 1972, while working as a Delta flight attendant, I was walking through the Atlanta terminal to my flight when I ran into my roommate from initial training. To my surprise I found myself skipping the small talk and when asked how I was doing, I quickly responded with, “Something’s missing in my life and I don’t know what it is, pray for me!” I was embarrassed that I voiced that since at the time I didn’t believe in prayer. The response I received from Barb was, “We will pray for you!” As I walked away, I noted that she said “we” and wondered why? Barb had gotten involved in a small group of flight attendants who were meeting for prayer and Bible study thru FCAP. As Barb promised, she shared my prayer request with them and also her need for a new roommate.

Shortly after this meeting with Barb, much to my surprise, she was on my flight as a passenger flying to Dallas to attend Jet Recurrent. While inflight I knelt in the aisle next to her and told her I hoped we could talk, but since it was a full flight with meal service, that wouldn’t be possible.  After expressing my thoughts to Barb and walking away, she quickly prayed, “Lord, if this is your time for me to tell Nancy about You, please open the door of opportunity.” Before I made it back to the galley, a thought popped into my mind. I quickly turned around and made my way back up the aisle to ask Barb if it would be alright if I went to her hotel and took a cab to mine later. Barb was elated! She knew that the Lord had clearly shown her that this was the time. While in Barb’s hotel room, she pulled out her Bible and I got nervous. I spoke first, sharing that I felt empty though I loved my job. Maybe it was from being single and meeting the right guy to marry was the answer but so many end in divorce, that couldn’t be the answer. Barb began sharing with me how my life was like a chalkboard that I had messed up, but that Jesus Christ was like the eraser and wanted to wipe the slate clean and take complete control of me. She stated that He had paid the penalty for all my sins; past, present and future! That was the best news I had ever heard!

As she spoke, I felt like I was hearing the good news for the first time, even though I had been raised in a Baptist church. My heart was pounding and I got so scared I told her I had to go and would think about all that she had said. Then she said, “You can leave here the same way you came in or you can go out a new creature in Christ, ‘Therefore, if any man be in Christ he is a new creation, old things have passed away, behold all things have become new.’ (2 Corinthians 5:17).  If you walk out the door without receiving Him after I’ve told you the truth, you’re in a state of rejecting Him. Can you reject Him?” I could not reject Him. I knew I must surrender completely to Him and give Him my life, which I did that night! Something serious had happened to me and I wondered if I needed to quit my job and maybe join a convent, since now I was surrendered to Him. Barb assured me that I was just to rest in Him and stay put, because He had a plan for my life and I was to trust Him to lead the way.

Shortly after this, I received a call from Barb asking me if I would like to move from New Orleans where I was based to Atlanta and become her roommate. I did!  In Atlanta I met flight attendants Janice Barfield, Sandy Browning, and others who had been praying for me and for Barb’s new roommate.  Both prayers were answered! I was then introduced to Joe Ivey who was leading a Bible study in his home where I met other fellow believers in the airlines. Being a believer on the airplane was exactly where God wanted me.

I began attending the FCAP luncheons on the 15th of every month. At one of these meetings, Pat Berryhill asked if I would mind sitting with Fran Garraux Hieber as it was her first time to attend. Because Barb moved, I had prayed that morning for the Lord to show me where I was to live and with whom. As soon as Fran and I sat down, she asked me where I lived and I told her I was praying about finding another place. She lit up and said she was looking for a roommate and would I be interested! Once again the Lord clearly answered my prayer and that day I went with Fran to see her apartment and made arrangements to move in with her. She and I were roommates until I married and are still very close friends to this day.

It was at another FCAP luncheon I met fellow flight attendant, Edward Church, who later introduced me to his best friend Gary Ott who had led him to the Lord years before. After meeting Gary and seeing each other only a few times, we knew that the Lord had brought us together to marry which is a whole other story to tell; of love, walking by faith, watching God lead and miraculously waiting on Him to convince us of His will. Needless to say the Lord used FCAP to introduce me to my Lord and Savior, my roommate, my husband and an ongoing discipleship that has grounded me throughout my Christian life.

Gary and I have been married for 44 years, have two amazing children who love the Lord and have Godly mates, and five wonderful grandchildren.