Home > THOUGHT FOR THE WEEK 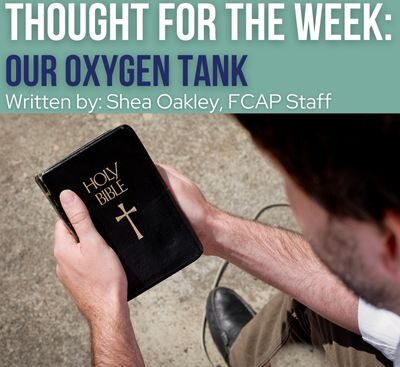 Sometimes we get tired of hearing about the need to be in God’s word every day. I know I have felt that way sometimes. That said, the fact remains that without the Bible we cannot hope to practice true Christianity. Regular reading of the Scriptures is how we “inhale” the “oxygen” of the faith. Just as in the physical sense, if we don’t breathe, we die.

The Bible, particularly the New Testament, is the only place people who want to be followers of Jesus can find His story, in His words. It is also the only place they can read the words, spoken through the prophets of the Old Testament, of the One who Jesus referred to as His Father.

The Bible and true Christianity are inseparable. Denominations that have disregarded scripture to be more “progressive” and “culturally relevant” have, in a sense, cut off the very limb they once stood upon. Perhaps that is why such denominations have been rapidly losing people in recent decades.

Watered-down Christianity just isn’t compelling in the long run. Truly biblical Christianity is booming in many parts of the world. Maybe that is because people in those places want the real thing or nothing at all.

“So then faith comes by hearing, and hearing by the word of God.” Romans 10:17 NKJV

This thought was written by Shea Oakley.  Shea is Principal Contributor for FCAP Social Media and also serves on our Advisory Board.