Recently I have been studying Joshua, one of my favorite books of the Bible.  It is the second time I have done a deep dive into this amazing story.  The first time I studied it I was blown away by the faithfulness of the Lord, Joshua, and Caleb.  This is the obvious overarching theme of the book, a timeless and wonderful truth.  However, this time one of my biggest takeaways has been much more subtle and it is contained at the end of the story.  It serves as a caution to the Israelites and to us.  The Israelites are slowly getting settled into the promised land and are finally experiencing the rest God assured them…at least some of the tribes are.

As I read this story, I was reminded at how often and easily I make compromises with the Lord.  Rather than following the Lord’s ways and receiving His rest, I try to clean up the mess I make.  Thankfully His grace is sufficient to help me clean it up, but it would be so much easier if I just followed Him the first time.  Another important truth I have learned is how I let my negative thoughts and lies defeat me.  We all have an eternal dialogue taking place in our minds throughout the day.  What does your dialogue sound like?  Is it pure, beautiful, and true (Philippians 4:8)?  Or is it telling you that you are not capable in the workplace or inadequate to lead your family?  If it is a lie, we are letting the “Canaanites” camp out in the promised land.  The enemy is taking a foothold in the land he doesn’t belong.

I recently started an experiment and placed an app called “60/60” on my phone.  Every hour a different scripture verse is revealed.  It is designed for me to reframe my internal dialogue and to remember two important truths.  First, I’m an heir to the King of Kings because of Jesus, my Savior.  Second, I can do nothing apart from Jesus unless I abide in Him (John 15:4).  Therefore, I will abide in him the next hour and receive His rest (Matthew 11:28).  Let’s conquer these “Canaanite” thoughts once and for all.  They have no place in the Lord’s Army or the airlines. 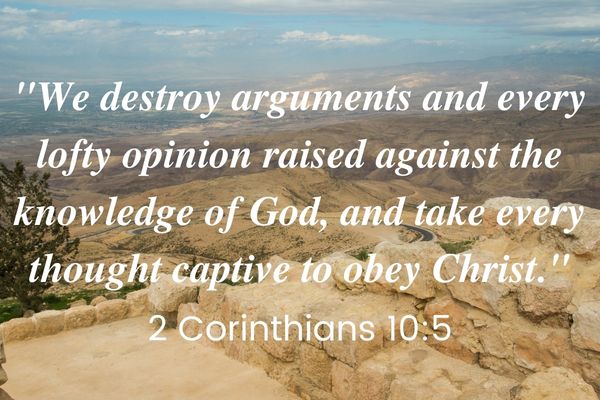 This article was written by Stephen Watts.  Stephen is a Captain with Delta Air Lines and also serves on our FCAP Board of Directors.