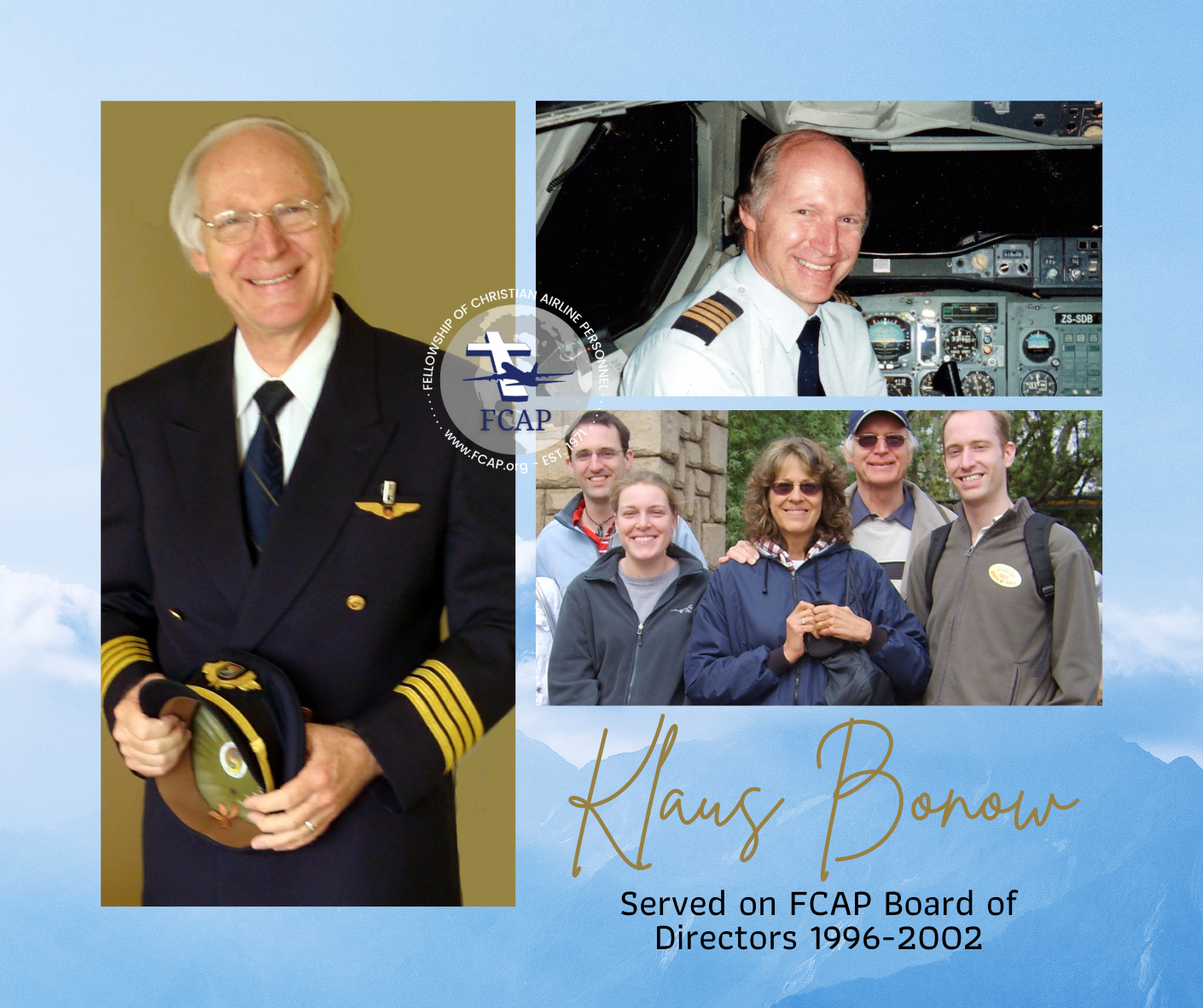 This month we are featuring beloved brother in Christ, Klaus Bonow. He served on the FCAP Board of Directors from 1996-2002, and is a retired pilot for South African Airways. Klaus has authored a book, When the Engines Stop found on Amazon. He and his dear wife Noleen have three grown children, Karl, Konrad, and Natasha.

Here is an excerpt from Klaus’s book:

“In the mid-1980’s Hennie Venter, a SAA Christian Flight Attendant, visited a New York Christian bookstore. While browsing, he met Joe Ivey, a Christian pilot of a major airline in the USA and the founder and President of FCAP. Hennie came back to SAA with a few “Trim Tabs” – the FCAP newsletter, printed in Atlanta, Georgia – which he gave me and a few other Christians. The newsletter introduced us to FCAP.

In 1987, Louisa (his wife who is now with the Lord) and I attended the FCAP International Convention, held in Colorado Springs in the Rocky Mountains that year. Breathtaking beauty – Pikes Peak and the Garden of the Gods – surrounded the venue. Being able to praise God with Christians from all over the world and hearing testimonies of what God was doing in the lives of others, as well as the thought-provoking messages by the guest speaker was an unforgettable experience.

When we returned to South Africa, I approached a fellow SAA pilot and Christian friend, Ken Tuck, and said to him, ‘Ken, I think FCAP is something we can support.’ We did. We started having meetings in our home and when the group became too big, we moved to a church hall down the road. Christians from various departments within SAA and from several other local airlines all supported FCAP and attended the monthly meetings. We had wonderful fellowship! Donations received from outsiders sponsored, in full, several Christians who could not afford the cost of attending the annual FCAP International Convention in the USA. They came back on fire for the Lord.

FCAP was very much a part of my life during the last twenty-five years of my flying career. I met many wonderful Christians from many different denominations – a fine example of church unity, based not on denominational membership, but on belonging to the Body of Christ. I believe we need to take our message of the Good News of Jesus to our workplace, encourage and pray for and with one another.

I also believe God gives us special gifts and unique opportunities to be effective for His kingdom, right there where the rubber meets the road.”

Amen! We hope you were blessed and encouraged by Klaus’s story.