Stories from the Frontline

Home > Stories from the Frontline 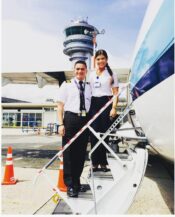 “My name is Camila, I am a flight attendant at EASYFLY, a domestic Colombian airline, where my husband also works as a flight operations officer. We met at the company and got married two years ago. In March 2020, due to the global COVID-19 pandemic, the Colombian government declared a total quarantine in the country and the airline management told us that our employment contract would be suspended for two months. At that time, I was very scared because my husband and I depended financially on this job. We had never seen ourselves in this kind of situation before, but what I did not know at that time was that God was going to teach us to depend totally on him and not on a job.

Those two months became six months, but God, in his immense mercy, sustained us. We never lacked anything during this time. God placed people here on earth to help us and even in times of a global crisis and without earning any money, He paid our debts. Besides, it was a time where we got closer to God, and we shared more time as a couple. We learned to value our job.  We undoubtedly enjoyed this quarantine while God supported and protected us from this virus.

In September, the airports started to be open for commercial flights, and we were called to work again. I, as a flight attendant, returned and found many changes and biosecurity protocols which included not providing service on board, so I was going to have more leisure time during flights. I asked God to show me what He wanted me to do during this time, so during the cruise stage, I started reading the Bible and Christian books. God has used those moments to speak to my heart, even to touch me so strongly to the point I found myself crying.  Then I asked Him ‘God please don’t touch me right now because the passengers can’t see me crying.’ However, God is so beautiful that He even kept my privacy in a plane full of people.  Without a doubt, 2020 will be a year that we will not forget, not only because of COVID-19, but because God showed us in His immense love that He has everything under control.” 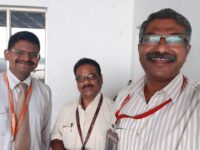 “Praise the LORD!  Just finished a small, wonderful time of prayer at our Air India hangers at Hyderabad.  Surging ahead by His grace.” – Raja Konatham (October 2020) 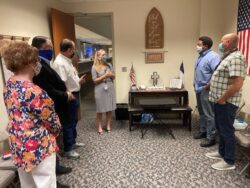 In September of 2020 Boise Airport Chapel celebrated the addition of three more names to their “Wall Of Fame” plaque in the chapel. First there is the addition of  Molly Kennedy, who passed away several months ago after fighting a battle with ALS. She was a TSA Inspector who lived out her faith in the workplace and was respected by all, despite the fact that airlines and other airport businesses don’t eagerly look forward to inspectors on the property. Molly was a very pleasant woman and loved by all.  The second person added is Addison King, manager of custodial services in the airport. A practicing Christian who was instrumental in helping at the Pentagon after the 9/11 terrorist attack, Addison has a great love and care for his employees and also has shared often with us about his desire to be a godly leader in his family.  Finally,  there is the addition of Daniel Nedich, who accepted Christ in the Boise Airport Chapel over two years ago.  Dan is a United airlines manager who actually is being transferred to Portland due to company cutbacks.  Dan also showed great concern for his staff, has a very calm, warm personality and has won the respect of his peers and his employees in the airport. He has persevered in caring for his wife as she struggled with cancer and eventually passed away on New Year’s Eve this past January. Dan now is a single dad while handling his responsibilities at work, a very godly man.