More Than a Job… 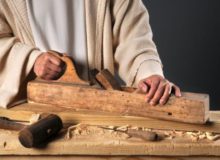 When our Lord walked this earth, His association with work and a professional job was stunning, to say the least. The people who knew Him identified him as “the carpenter” (Mark 6:2-3), meaning He did more than do some carpentry work every so often. Rather, the use of the definite article “the Carpenter” clearly pointed to it as His occupation and even operating a business, where He offered a service and made a profit. But also, His claims to be God and yet working with His hands as a carpenter challenged the culture’s warped view of work. The Greco Roman culture of His day thought any person who worked such a menial job with His hands was unimportant and lacking any influence within the culture. But Jesus was exemplary in His work as a carpenter. We are told that He grew not only in favor with God, but also in favor with humans (Luke 2:52), which included those with whom He associated in His professional life. Though the world in His day look upon His carpentry job as meaningless, His example drew the attention of people and His Heavenly Father who said in Mark 1:11, “You are my beloved Son, in You I have been pleased.” Up to this point, all that He had done was work as carpenter. Our work is more than a job or position… it is a calling where we demonstrate our faith in the Lord daily in the details of our work. (PMC)