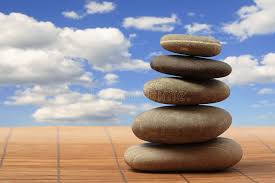 God gave David five smooth stones for his battle with Goliath.  God equips us, so to speak, with five stones to handle obstacles and challenges in our lives.  In 1 Samuel 17, we discover Goliath stood over nine feet tall, was arrayed in armor and taunted the armies of Israel.  He was big, skillful, and intimidating.  No one stood up to him, except David.

King Saul tried to place his armor on David, but that did not work.  After trying on Saul’s armor, David said:  “ ‘I cannot go in these,’ he said to Saul, ‘because I am not used to them.’ So he took them off. 40 Then he took his staff in his hand, chose five smooth stones from the stream, put them in the pouch of his shepherd’s bag and, with his sling in his hand, approached the Philistine.”  1 Samuel 17:38-39 NIV

David decided to use what God had already given him.  He grabbed his shepherd’s staff, a tool he was accustomed to using, and David confidently headed out to battle.  On the way, he chose five smooth stones from the brook.  He courageously approached Goliath and killed him with his very first stone. David’s faith was born out of his experience of God’s grace and mercy in his life up to that point.  The Lord had delivered him out of many dangerous situations in the past, proving God’s power, trustworthiness, and faithfulness.  David relied on God, not his own strength, to deliver him from Goliath.

David has taught us a lesson in preparedness.  He went into battle with the five stones.  His plan was to kill Goliath with the first stone, but he was prepared if he needed a second or third one. The depth of our maturity in God prepares us to slay our giants.  Each person has one or more giants.  Our personal giants may be pain, physical ailments, loneliness, financial burden, social media, substance abuse, anxiety, relational struggles, and the list goes on.  Your Goliath is real!

Christ promises us that at some point in life we can expect highs and lows (John 16:33).  If we are adequately prepared by being in a close relationship with God, He will see us through.  Our job is to focus on what God has to say about the giant and not to focus on the giant itself.

Have you ever wondered why David picked up smooth stones?  Jagged stones might have hurt Goliath more.  But smooth stones are only that way because they have been tumbled over time and their rough edges have been made smooth.  They are an instrument of God’s provisions.  Perhaps David also knew that smooth stones would work best in his sling.

Smooth stones take years to form.  Refining is never easy.  It is necessary.  Being mature in the Lord through a refining process is vital if we are going to impact culture and bring personal and corporate victory. When we stay yielded to our Lord and allow Him to smooth out the rough areas in our lives, we will be ready to partner with Him when our Goliath stands in front of us.

Our Victory in Battle

What is your Goliath?  It is suggested that you always have five stones ready for your battle.  We need to have the same five stones that David had in his pouch that represent what David carried in his heart:

With those five stones, we can win any battle.  One stone at a time.  Glory to God for His faithfulness.  LHN

“I have told you these things, so that in me you may have peace. In this world you will have trouble. But take heart! I have overcome the world.”       John 16:33

This article was written by LeeAnn Hurrle Nelson. LeeAnn is a retired Delta Flight Attendant and also serves on our FCAP Board of Directors.

Browse Archives of Past Issues