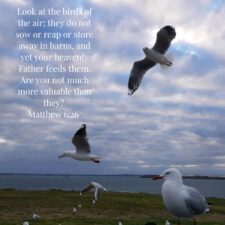 “Devalued” is probably an accurate word to describe how many people feel these days. Companies are making difficult decisions to lay off, furlough, and push for early retirement. This makes people feel they are no longer needed or of value to the company. In addition to this, we are being asked more and more to make choices to what degree people have value in society. What has God to say about this?

Interestingly, following the resurrection of Christ, the first century church faced a society that grossly devalued people for various reasons. They determined a person’s value based on their birth, gender, race, nationality, citizenship, education, status, and work. However, Jesus Christ taught His followers to see value and show respect equally to all people. He was very aware of the bias in the world value system of that day. You were valuable and could impress people with what you possessed or by the amount you had stored up. He once told His followers not to value life based on whether or not you eat the finest and purest of food or wear the finest and most stylish clothes. Jesus concluded by stating that the value of life does not consist of temporary things, but of something far greater (Matthew 6:25-33).

Because people are made in the image of God, they have eternal value… something that only God has given them (Genesis 1:27). Sadly, when human society excludes God from their ideals, they will devalue human life one way or another. But when humans acknowledge their worth because of God, they understand and appreciate that life is a valuable gift from God. PMC  “Consider the ravens: they neither sow nor reap, they have neither storehouse nor barn, and yet God feeds them. Of how much more value are you than the birds!” (Luke 12:24)

This thought was written by Paul M.Curtas, General Director of FCAP.

From Anger to Freedom

How can any nation or people survive when hatred controls their normal way of life? God described how unchecked anger turns into hatred, and none of us are exempt from this. It starts by entertaining angry thoughts, which when left unchecked reproduce themselves and become hatred. This will affect our character, making us erratic and impulsive in our response to others. When hatred rules our life, we lose our ability to perceive what is good and wholesome. Instead we go so far as to accuse, hurt, and even destroy innocent people. Jesus Christ once addressed a group of religious leaders who were angry at him, because he told them that their anger was the seeds that produce murder (Matthew 5:22). Within a few years after saying this, these same religious leaders, who tenaciously pursued to kill him, falsely accused him before Roman authority and had him executed by crucifixion. The good news is that the love of God through Jesus Christ is the only cure for conquering such anger and hatred. This heart condition is not something we can fix, but only God can solve… when we humbly acknowledge our need of Him to set us free by His saving grace. Consider: “Everyone who continues to commit sin is a slave of sin. But, if the Son (Jesus Christ) sets you free, you will be really free” (John 8:34, 36).

We have so much information coming at us. While most of it claims to be the facts on how and why things happen, it is hard to know what are the true facts. Of course, we have available “Facts Check,” which is available through Google, Facebook, Twitter, Wikipedia, political parties, and various news medias. The problem is they often contradict one another. How can we possibly know the truth about the facts?

God’s has given us a “Facts Check” of a different kind. It is more like a Facts Reality or Facts Act. God advises us to look more at the fruits of facts by going beyond what is stated and look at behavior. Jesus once engaged with a group of people who saw themselves to be wise and experts at analyzing people’s character. These analysts went to great extent to eloquently talk about peoples faults and failings. Jesus pointed out that the real facts about a person’s life is not simply in the information they express about themselves or others, but in the fruits that come from what they demonstrate in their actions (Matthew 7:15-19).  People may say how they have compassion and concern for others. But when the fruit of their life shows the contrary (i.e. ongoing selfishness, demeaning responses, domineering behavior, etc.), the real fact is, what they claim is not how they live (Romans 12:9). The facts that make up who we are are more than a single deed we do, more than a passionate cause or slogan we hold.  Jesus said, “You will know them by their fruits” (Matthew 7:20).  Let’s start, not by looking at others, but by asking the Lord to produce the fruit of the Spirit in our actions.  Consider:  “But the fruit of the Spirit is love, joy, peace, patience, kindness, goodness, faithfulness, gentleness, self-control; against such things there is no law” (Galatians 5:22-23).

In Pursuit of Life and Peace 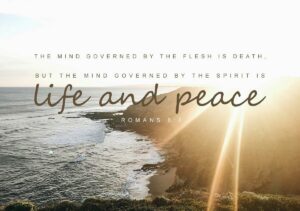 Suffering and trials are what the Church is made for. Nothing that recently has happened in the world is shocking, as we’ve been forewarned of it within the Scriptures. The heart of man is exceedingly wicked; there are none that fear God; the flesh is at enmity with Him; and man is not simply indifferent to holy things, he’s hostile toward them. However, the church isn’t called to merely survive in times of virus and violence, she is encouraged instead to thrive.

Paul says in Romans 8:6, “For the outlook of the flesh is death, but the outlook of the Spirit is life and peace.”  And so Christians are able to see wickedness, injustice, sickness, and death through the filter of hope … not in a temporal sense, but through an eternal expectation that God will be glorified.

Our earthly duties remain … spend much time in prayer, love your neighbor, be charitable as needs arise, and work as unto the Lord. Life is abundant and abounds in peace only as your foundation is secure in the Gospel of Jesus Christ, our Lord and Savior.  Grace to all.  TCF

This thought was written by Tim Files, an Aircraft Systems Analyst with Delta Air Lines. Tim also serves as Secretary-Treasurer of our FCAP Board of Directors.

A Thought in This Time…

So many images, comments, and actions have emerged over the last week, here in US, as a result of the horrible and tragic death of George Floyd. In light of this, we ask Christians, who encompass all nationalities, races, and tribal groups, to show their love and unity by engaging in prayer together. Pray for God’s comfort for this man’s family and friends, pray for God’s grace needed in our healing process, and pray for God’s wisdom and collaboration among leaders to work together for needed changes. Jesus said the love and unity that Christians demonstrate will be a witness to the world (John 13:34-35).

United in Christ,
The FCAP Staff

Religion and philosophy go in many different directions to describe how near or how far God is from us. Some believe that God cannot be known because He is far away. They say that after He created the world He left it to operate on its own, and for us to figure it out. An opposite view says God is part of everything, and His presence is manifested through both good and evil. However, this makes God’s character rather confusing. Some years ago a pop singer sang a hit song depicting God looking at the world “From a Distance” where men and woman supposedly had a common aspiration for peace and hope but were at war. It depicts God as keeping His distance from us, and not wanting to be bothered with human stupidity and tragedy.

If there is no place that we can hide from God’s presence, then we should be learning daily how to live in His presence. We should be trusting Him with our lives…we should be seeking His face daily through prayer and learning His Word… His provisions and leading through His Spirit should be transforming our lives (2 Corinthians 3:17-18).