Speaking at Church in Stuttgart 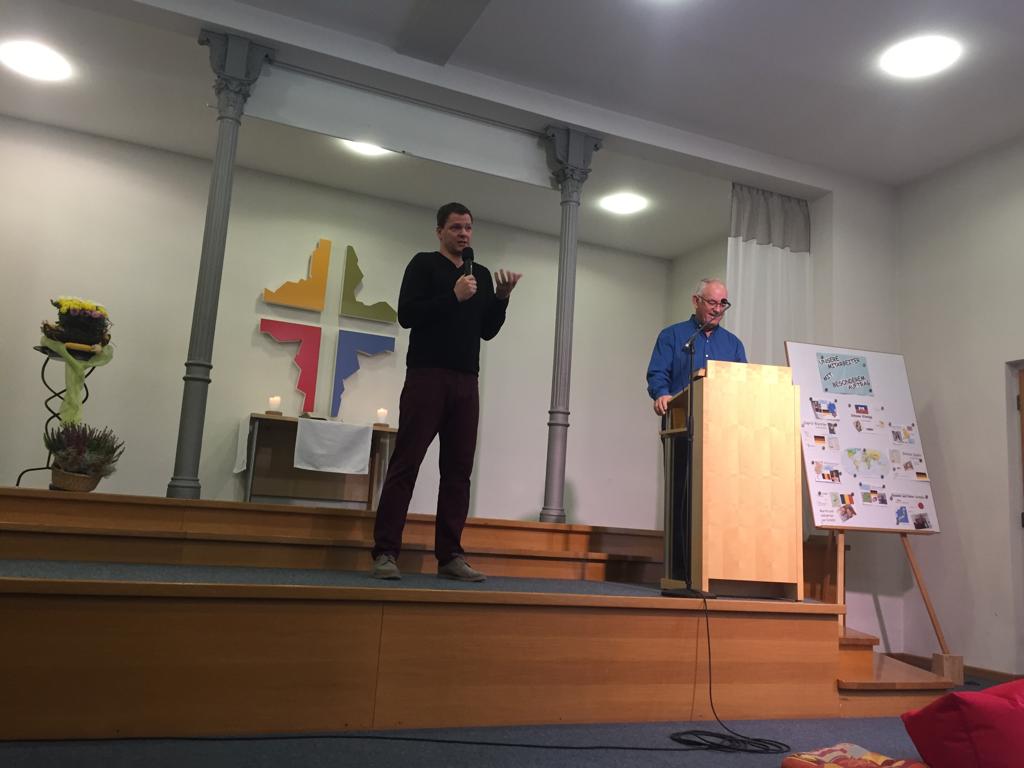 FCAP General Director Paul Curtas, accompanied by Bjoern Strotmann (Lufthansa Flight Attendant based in Frankfurt), had the privilege of speaking at a church in Stuttgart on Sunday morning, November 3.  Over 170 people were in attendance.  Once again, the message of living the Christian life in the workplace was well received.  The pastor of this church is eager to encourage their people in their workplace environment.  There were reportedly several people from other churches in the area who came to hear Paul speak as well.  Thank you, Bjoern, for a wonderful job translating the message! 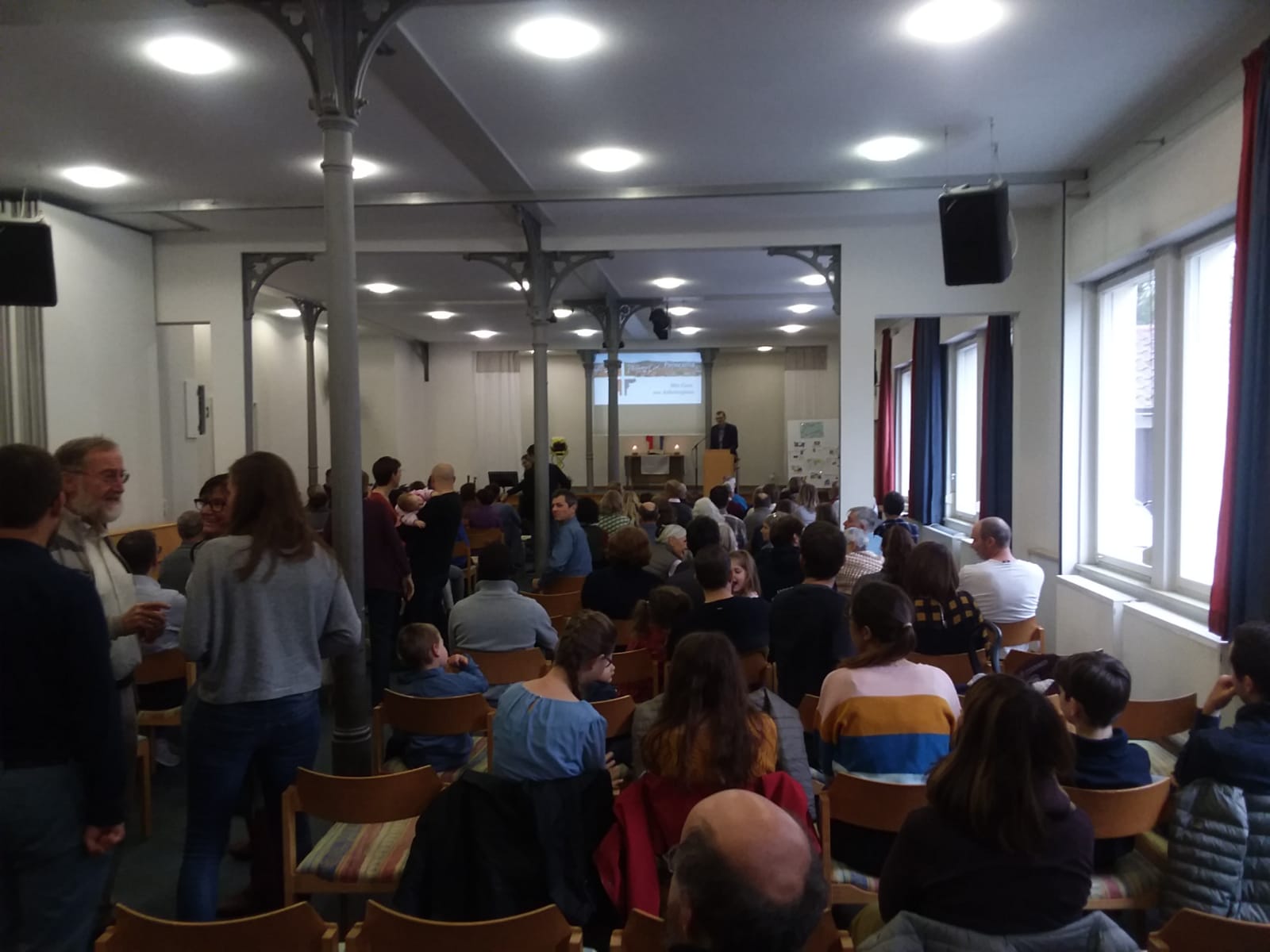 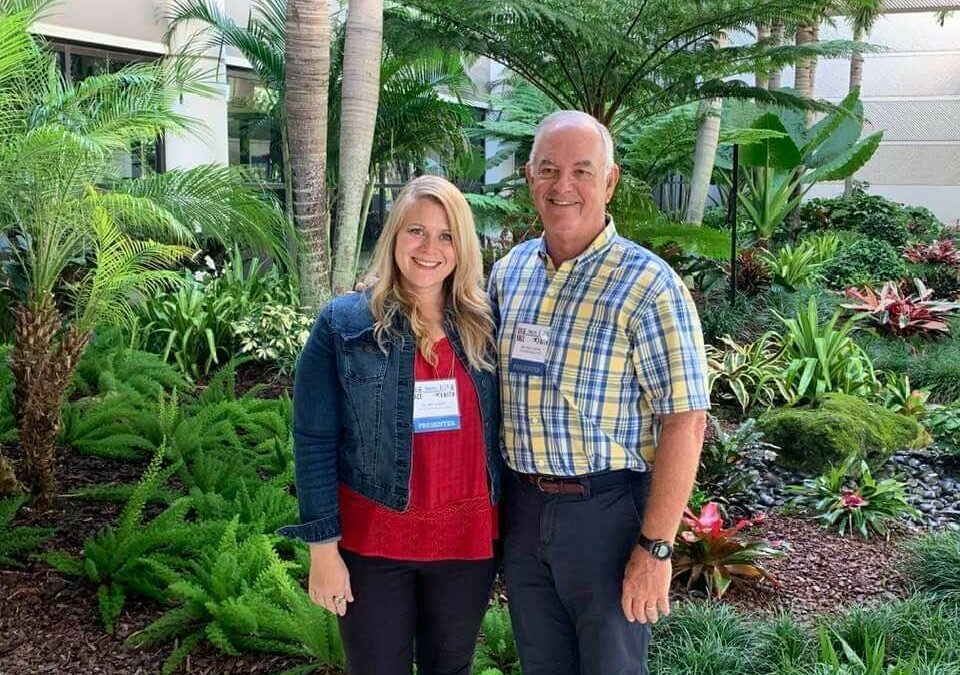 Opportunity With Educators in Florida

In mid October, Paul Curtas (FCAP General Director) had opportunity to conduct a workshop for educators at the FACCS Conference (Florida Association 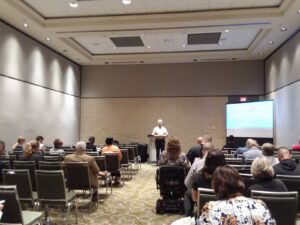 of Christian Colleges and Schools).  He addressed the topic of a biblical view of work.  Amy DuBois, a professor at Columbia International University, was also a workshop presenter there.  In her workshop, she presented a biblical worldview of wealth and money management.  Amy has been a special blessing to us in FCAP over the past few years as she helped open the doors for Paul to go into the CIU Business School and share our Workplace Seminars with their students; she has been a tremendous encouragement and help with us in other things as well. (Pictured above are Paul and Amy at the FACCS Conference venue in Orlando.) 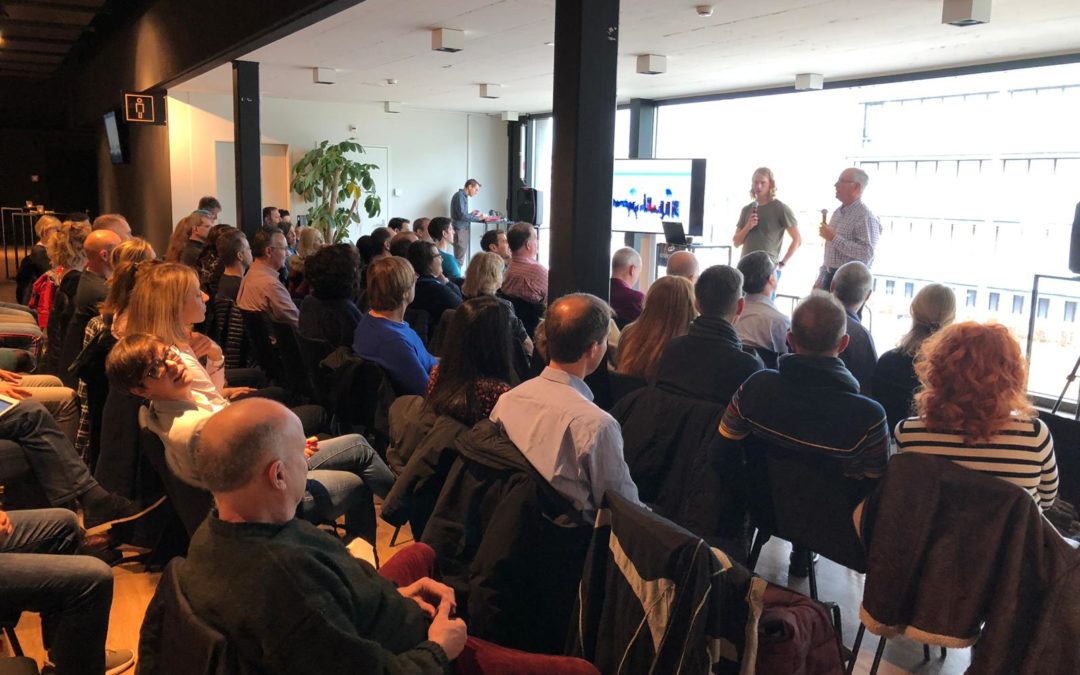 Recently FCAP General Director Paul Curtas once again had the privilege of presenting material from his book, When God Shows Up at Work.   He was with a Business Fellowship group meeting at the ICF church in Zurich. Around 75-80 were in attendance.  Paul describes his time as “another incredible reception.”

If you have not yet had opportunity to read Paul’s book, you can obtain a copy of the book through this link:  When God Shows Up at Work. 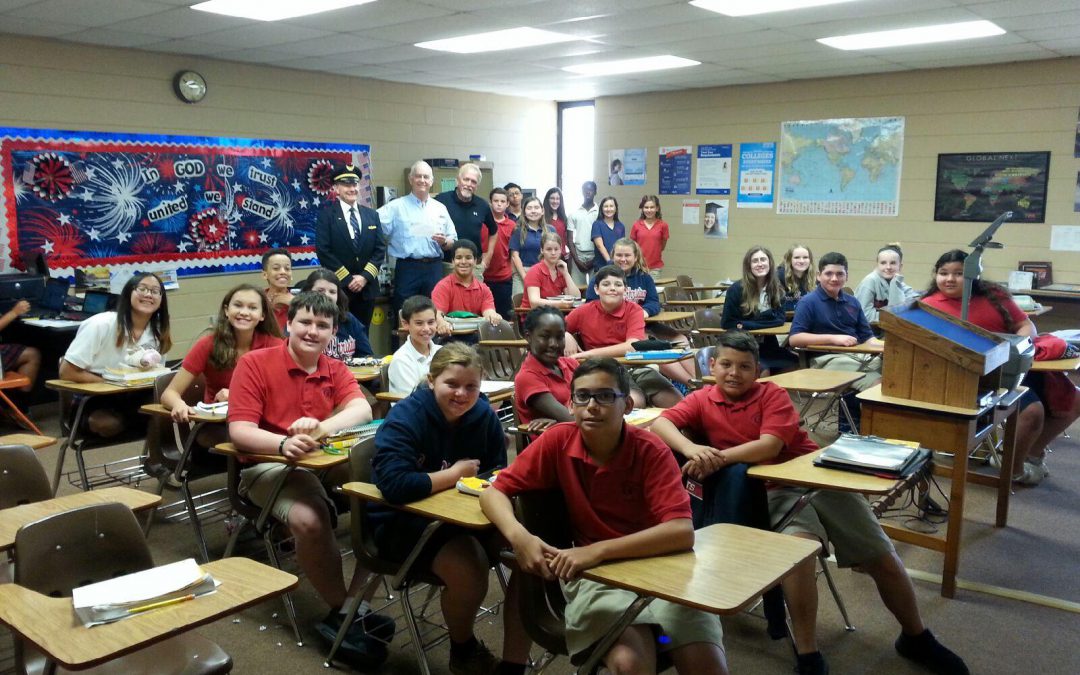 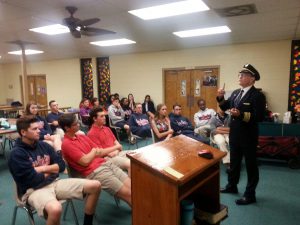 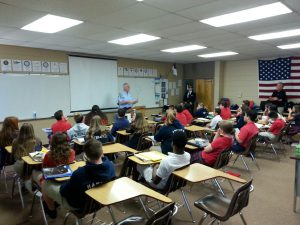 On Thursday, April 6, Paul and Claudette Curtas, accompanied by Jack Bowen (United Airlines Captain), had the privilege of speaking to 40 juniors and seniors at Grace Christian School in Brandon, FL (near Tampa).  Paul and Jack spoke about God’s view of work and the future of these students within the workplace.  They also spoke to a class of 31 7th graders who have adopted Paul and Claudette (and FCAP) as their missionaries.  Over $100 was raised by these students this school year to give to the mission.  Paul, Claudette, and Jack were all three touched by 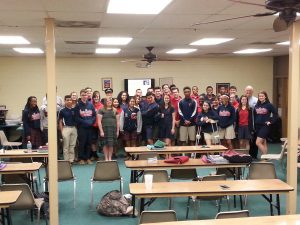 their faithful prayers and generosity.  So are all of us in FCAP! 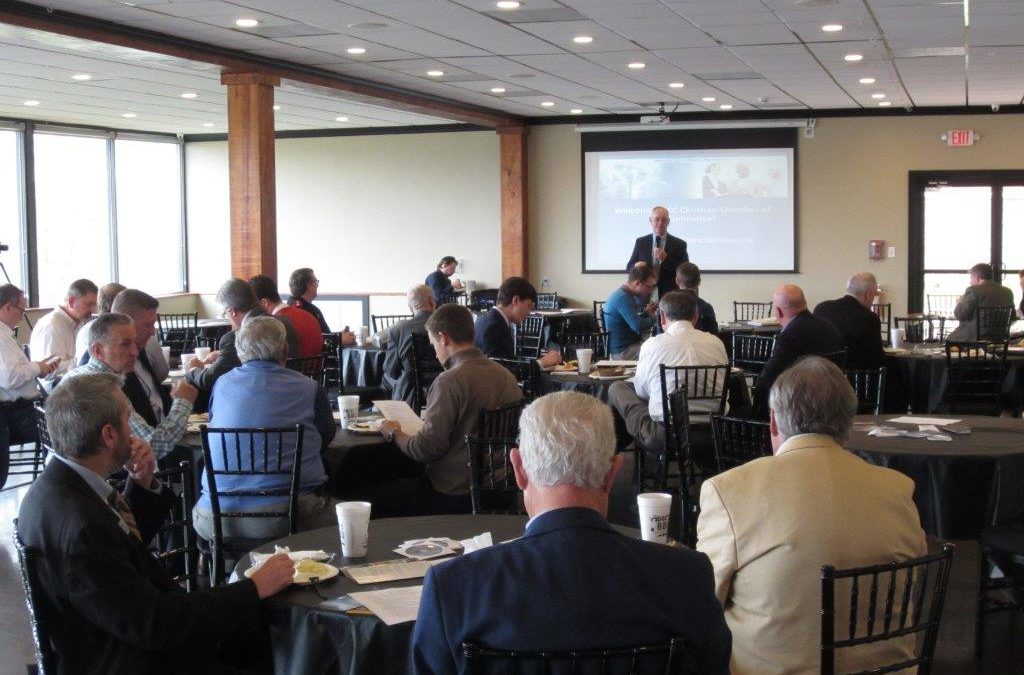 Recently, Paul and Claudette Curtas had the special opportunity of returning to Columbia, SC where Paul had been invited to speak at the SC Christian Chamber of Commerce luncheon.   The evening before, they were also able to enjoy dinner with the faculty and staff of the Business department of Columbia International University. What a great group of people! They went to a fabulous restaurant in Lexington, SC called “Flight Deck.”  It was full of aviation history hanging on the walls…neat place and great food.  Both Paul and Claudette expressed how blessed they were to be a part of this time. 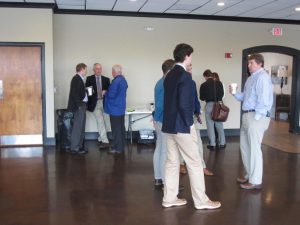 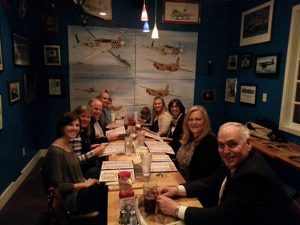 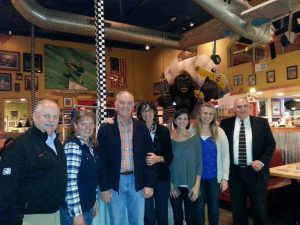 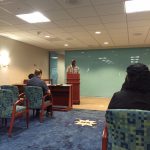 On December 7, our newest staff member, Monix Mathieu, had the blessing of speaking at the Miami International Airport Chapel service.  Fifteen people were in attendance.  In addition to airport and airline personnel, there was a young man who was googling churches and for some reason googled MIA Airport and discovered their meeting … he now takes the bus to attend on Wednesdays.  Also among the group were some passengers who were passing by and stayed for the message.   Ana Duarte wrote, “Monix was very winsome and his message was a call to action, certainly a wake up call…. We had a great time of ministry.  There was a sense of something ‘new’ happening.”