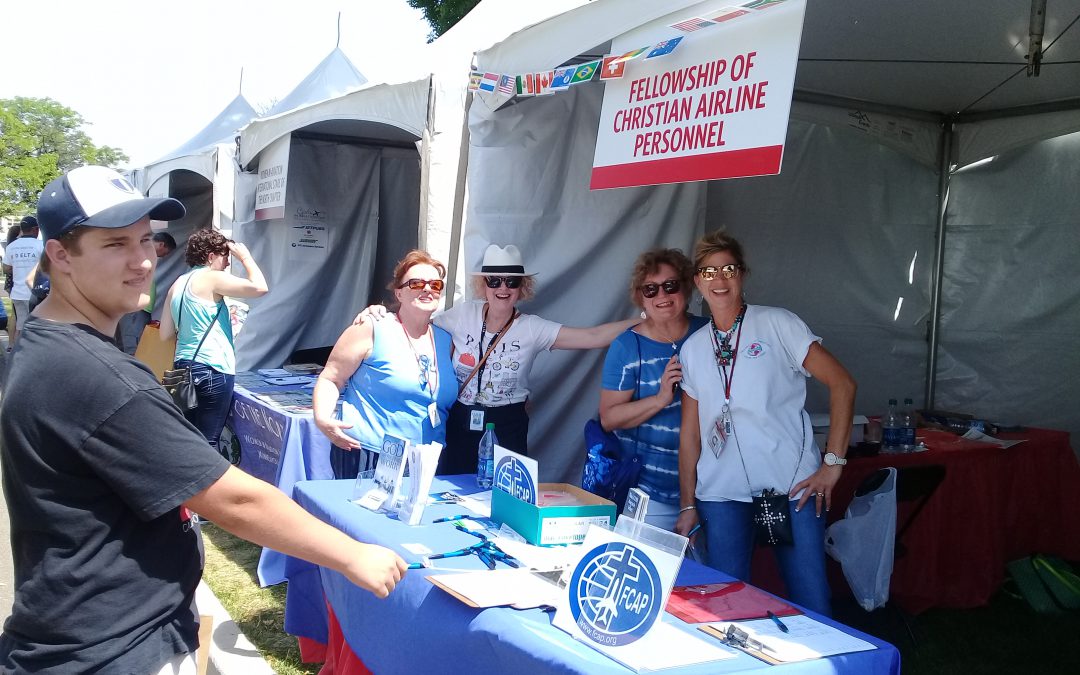 For a number of years now we have had the special blessing of hosting a booth at Delta Block Parties in ATL, MSP, and SLC.  Last Saturday, June 3, representatives from FCAP once again enjoyed that time in Minneapolis.  A big heartfelt thank you to all who came to help us set up and oversee the booth and prepare giveaway baskets.  You were a blessing to many! Our prayer remains that our presence and outreach there will have an everlasting impact for God’s glory. 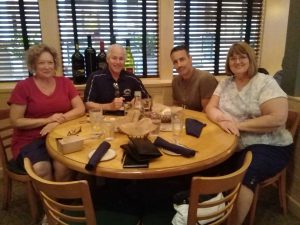 An added note:  As people who have been involved with FCAP for many years will attest to, “Fellowship” is an important aspect of this ministry.  On Friday night prior to the MSP Block Party, four members of our FCAP family enjoyed additional fellowship time over dinner (photo below).  Others had wanted to join them but were not able to do so … and they were greatly missed. 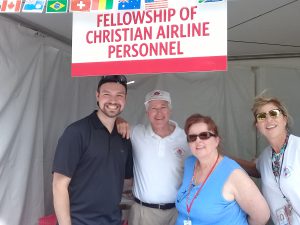 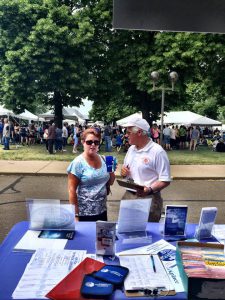 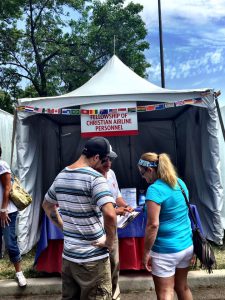 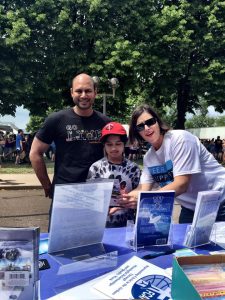 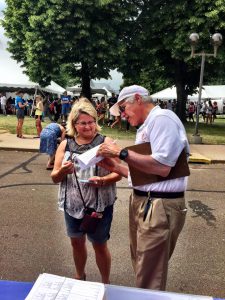 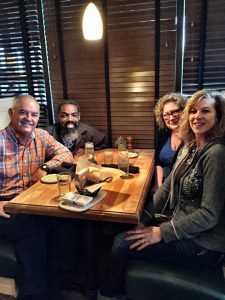 The evening before the Workplace Training #2 held in Minneapolis, Paul Curtas and Monix Mathieu enjoyed fellowship over dinner with two flight attendants who have been a part of FCAP for many years, Debbie Regello and LeeAnn Nelson. In fact, both had just begun their careers with Delta when they were individually introduced to the Lord and to FCAP.  We are grateful for those who invested their time in the lives of these women…leading them to Christ and to us!  And we are grateful for Debbie and LeeAnn as they continue to invest in the lives of others.

How refreshing it is to read heart-warming stories that are shared about the airlines and their employees.  Charlotte Smith (FA with Frontier) shares the following: 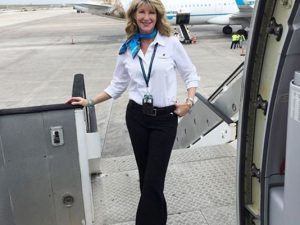 “This is an amazing story… I was working this flight and can’t say enough about how awesome Kirsten was to help this beautiful pregnant woman when she began having contractions on our flight. She had a toddler in her lap, her husband was deployed and she was to have a C-Section in a few weeks because she was unable to have the baby normally.
We were diverted to St. Louis where there would be no one that she knew to be with her and who would take care of her toddler while she was in the ER. Wow! Did I mention there was another serious medical incident going on at the same time during our flight?!? Thankfully, Kirsten asked Crew Scheduling when we landed if she could accompany this woman and care for the toddler while at the hospital. They granted her permission since there was a deadheading Flight Attendant that could take Kirsten’s place and continue to Cincinnati. I was so thankful for Kirsten’s heart to serve and Frontier’s willingness to place more value on this Mom, her toddler and unborn baby than the interruption of service and financial expense. In light of all the negative press regarding airlines, this is a most heartwarming story…I know it is true because I was there!”  ( Published News Article) 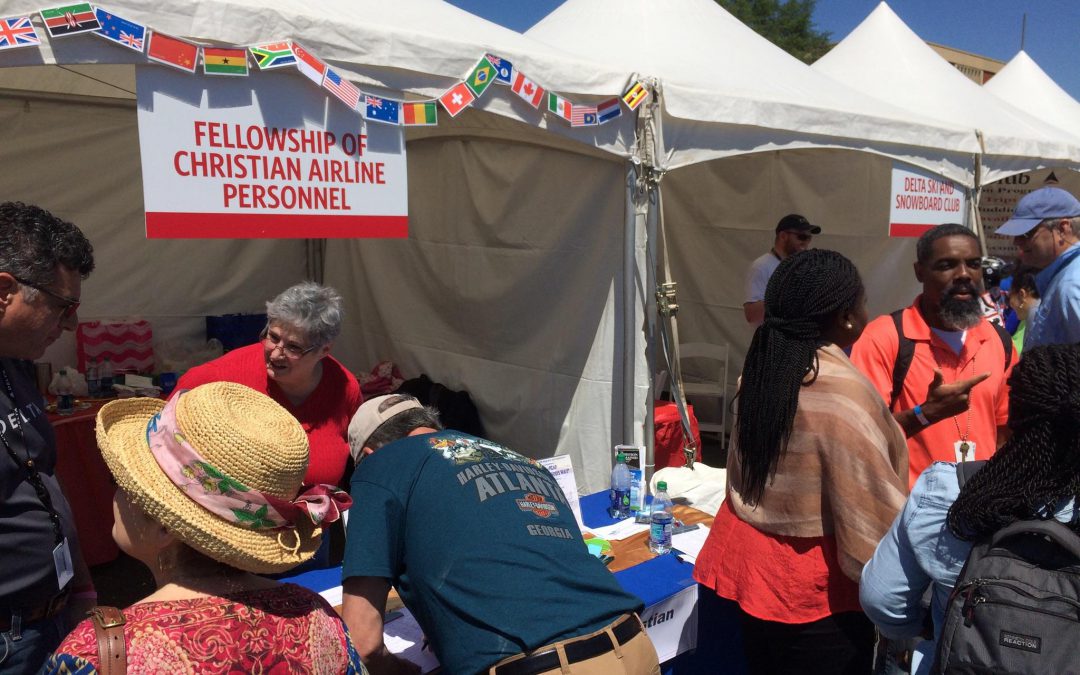 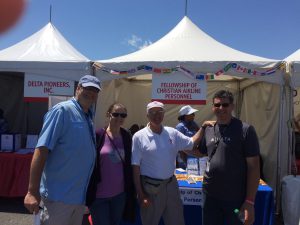 FCAP once again had the privilege of hosting a booth at the 2017 Delta Block Party held on May 6 in ATL.  Approximately 23,000 Delta people and their friends and family members came out to the event to enjoy a sunny day of food, music, sports, games and other festivities.  Our thanks to Tim and Carol Files, Chris Iaconis, Patricia Gilmore, Monix Mathieu, and Edward Church for setting up and manning the booth.  They so enjoyed interaction with the many people who stopped by to visit us.  Some of those were friends for many years, while others had never before heard about FCAP.  (We are praying that some of those will plan to attend our Workplace Training #1 coming up here in ATL on May 24 Informational Flyer and Registration Form.)   Our next stop … Minneapolis on June 3 for their Delta Block Party!

As an outgrowth of the FCAP group in Boise, a chapel was opened at the Boise International Airport in August of 2007.  Warren Milanowski (retired Delta and former TSA employee) has faithfully served as Chaplain there.  His big heart  and faithful outreach have been a blessing to many as he and others working with the Chapel ministry there pray with and for the airline and airport employees, extend words of encouragement, and share the Gospel message.  It is a joy when the fruit of such outreach is revealed, as was the case recently when an airport employee accepted Christ.  Our thanks to all who support the BOI Airport Chapel Ministry through donations and prayer … your investment is not in vain! 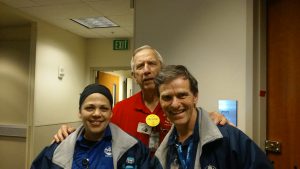 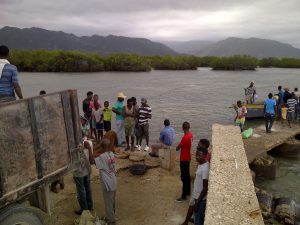 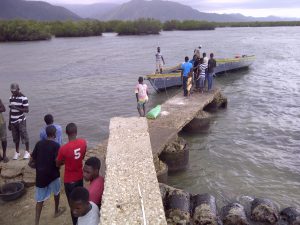 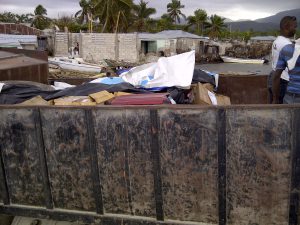 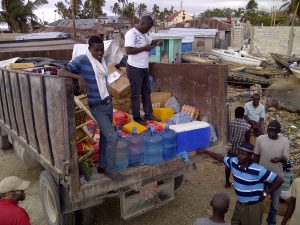 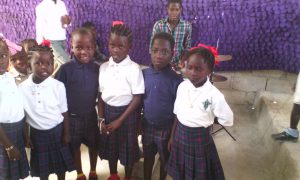 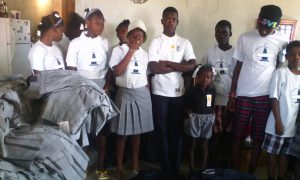 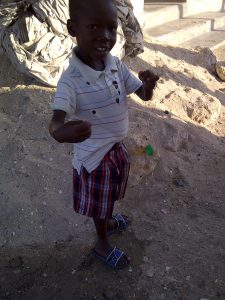