When the birth of Christ was announced to the shepherds, the angel said, “The Lord Himself will give you a sign…” (Luke 2:12). When we think about a sign, we think of something that points us in a direction, gives guidance, encourages us toward a particular way. It is also used to warn people to change their course or ways. Jesus gave signs and wonders to encourage people’s faith (John 2:11).

Have you ever thought of yourself as a “sign” from God to people? The Apostle Paul described how Christians can be a “sign” to people in two ways. One is being a sign of destruction. Wow, now this sounds rather strange and intimidating, but it’s not this way. You see when the conduct of Christians reflects God’s character and the Gospel, some people will look at this as a threat to their wayward life and feel condemned. You may not even say a word to them, but your example convicts them and they may even feel you are destroying their life. The Apostle Peter told us that people like this will look upon us with contempt and eventually malign us for our good conduct (1 Peter 4:3-5).

The other sign you become is a sign of salvation. Paul tells us not to let ourselves become intimidated by those who oppose us, nor should we try and argue with them. Instead, he tells us that our boldness is demonstrated through our confidence and hope that God’s saving work is present in each situation (Philippians 1:20). And we must remember that our presentation of God’s salvation to people should be one that shows them His love, patience and forgiveness.

How is your life pointing people to God, like a sign? When it does, some people may see you as threatening, and to others you may be appealing. But know this… God is using us to make His appeal to people. PMC   “Only conduct yourselves in a manner worthy of the Gospel of Christ… not being intimidated in any way by your opponents. This is a sign of their destruction, but of your salvation – a sign which is from God.” (Philippians 1:27-28) 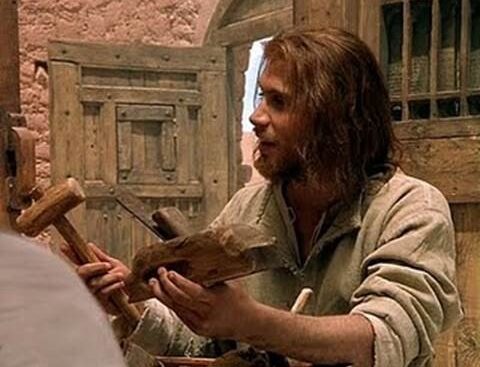 You may be thinking, “Jesus’ business life?… Didn’t He live a solitary life mostly away from people, and spend much of His time in prayer out in the wilderness?  Then at the age of 29 He went public and revealed His identity and mission as God?”  There is another aspect of Jesus’ earthly life we should not ignore.

The four Gospels reveal Jesus’ publicly ministry during the last 3.5 years of His life. However, it is known and believed that Jesus, from around the age of 12 through 29, worked a job and probably ran a family business. We know that Jesus’ earthly guardian father, Joseph, was a carpenter and taught Him the trade (Matthew 13:55). We get a glimpse of this in Mark 6:2-3. Jesus had just started His public ministry and the religious leaders took issue with Him. They saw His wisdom and power but were puzzled and thought he should not be capable of this. They pointed to Jesus’ work-life and sarcastically said, “Is not this the carpenter?” But interestingly, Mark’s use of the definite article “the” points out that Jesus did more than just some carpentry work. His was identified by His work with the title “the carpenter,” meaning He was known for His carpentry work and business. The Greco-Roman culture’s view of work was distorted, and the Jewish religious leaders had adapted the cultural view. They could not justify how anyone who worked as a carpenter could be of any influence or importance to society. Jesus’ business life was a paradox to them.

Pleasing to the Father

At the age of 12, Jesus told His parents that He would be busy carrying out the business and interest of His Heavenly Father (Luke 2:46). The Apostle John, in his Gospel, would record Jesus saying three times that He came to accomplish the work given to him by His Father (John 4:34; 5:36-37; 17:4). Certainly the work of redemption is in the forefront here. But we should not ignore His work as a carpenter for 17+ years and running the family business … Jesus saw this as an assignment by His Father to complete. Again we get a glimpse in a few verses found in Mark 1:9-11 that point to this. Jesus started His public ministry at the age of 29, at His baptism. We are told that the Spirit came down as a dove from Heaven. Then the Father’s voice was heard to say… “This is my beloved Son, in Him I am well pleased.” In the original language, this is a past tense… meaning all that Jesus had done up to this point was pleasing to His Father. What He mostly had done up to this point was work as a carpenter and run a business. Here, our Heavenly Father commended His Son’s example in His work-life.  Though the culture of that day looked down on Jesus’ profession, God the Father had been pleased with His carpentry work and business.

How do you view your work-life? God gives value to your work regardless of how the world looks upon your job. It is an important part of His big plan. Do you see your job as opportunity to show how your faith in God acts and responds to the daily responsibilities and challenges of work?  It was said of Jesus that He learned obedience through the things He suffered (Hebrews 5:8; 2:18). Certainly this applied to the difficulties of His work/business life. The Apostle Peter tells us that opportunities will come as people observe our Godly conduct in our work (1 Peter 2:12-13; 3:15). So, give yourself wholly to God by working diligently in your job. There is great joy in discovering what God can do through your work-life. PMC

“Do your work heartily, as for the Lord and not for people, …it is from the Lord that you will receive the reward of the inheritance. It is the Lord Christ whom you serve.”  Colossians 3:23-24

This article was written by Paul M. Curtas, General Director of FCAP. 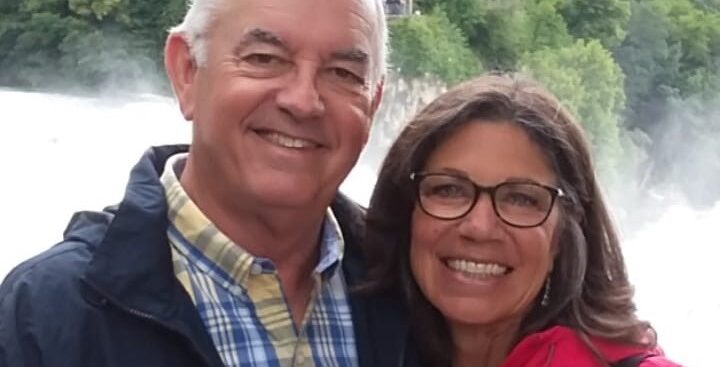 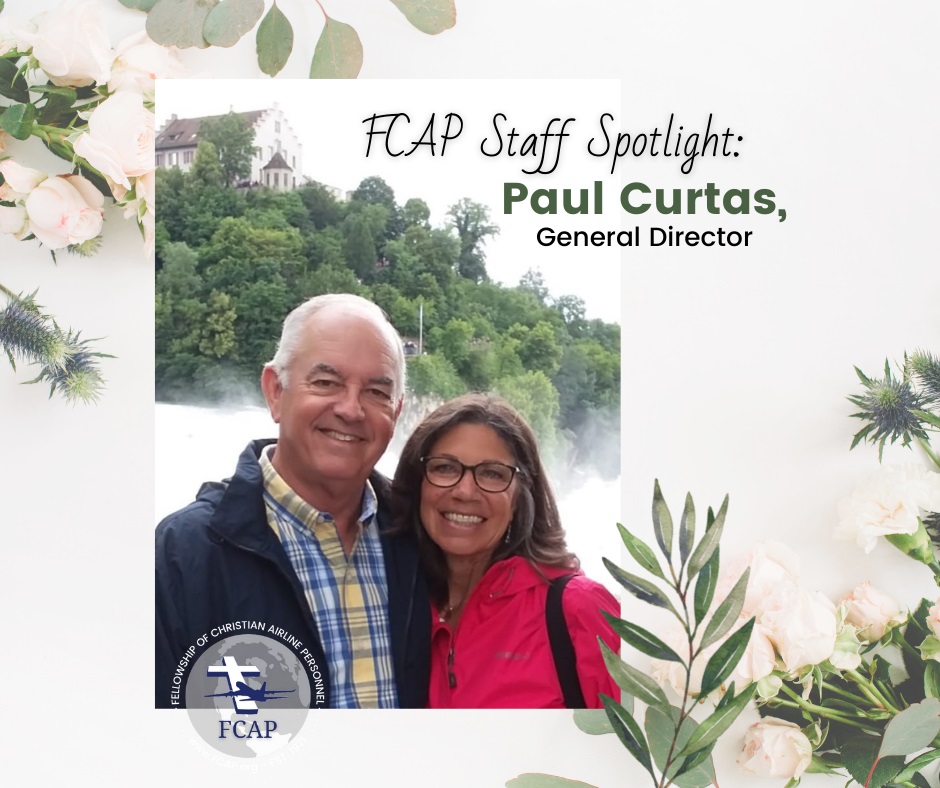 This month for our Staff Spotlight, we are featuring Paul Curtas, FCAP’s General Director! If you have had the opportunity to meet Paul, you know what a warm and gentle personality he has. He’s allowed the Lord to use his life in ways that have had ripple effects all around the world, and utilized his gifts of speaking, writing and teaching for God’s glory!

Paul writes thoughtful messages weekly with encouraging scripture verses, but one in particular he shared for this feature as his “life verse” is:

“According to my earnest expectation and hope that in nothing I shall be ashamed, but with all boldness, as always, so now also Christ will be magnified in my body, whether by life or by death. For to me, to live is Christ, and to die is gain.” Philippians 1:20-21

From Paul’s Bio, also on our website at www.fcap.org:

“Paul grew up in a big family in Tampa, Florida where he enjoyed sports and recreation on the Bay. He pursued vocational Christian ministry which led him to a ministerial and theological education at Florida Bible College (Bachelor’s Degree). He also studied Apologetics at L’Abri Fellowship in Huemoz, Switzerland; then studied at Biblical Seminary in Hatfield, Pennsylvania; and completed a Master’s Degree at Columbia International University in Columbia, South Carolina. Paul has served on staff in two different churches. In 1992 he became General Director of the Fellowship of Christian Airline Personnel (FCAP). For three decades now, Paul has visited and worked with people both individually and in group settings within the workplace in North America, Europe, Asia, Africa, and the South Pacific. Based on his many years of experience with employees and leaders at the workplace and his core beliefs as a Christian, he communicates how the Christian faith gives work its greatest purpose in the most practical ways. He has authored a book entitled “When God Shows Up At Work” which is available in English, German and Spanish. 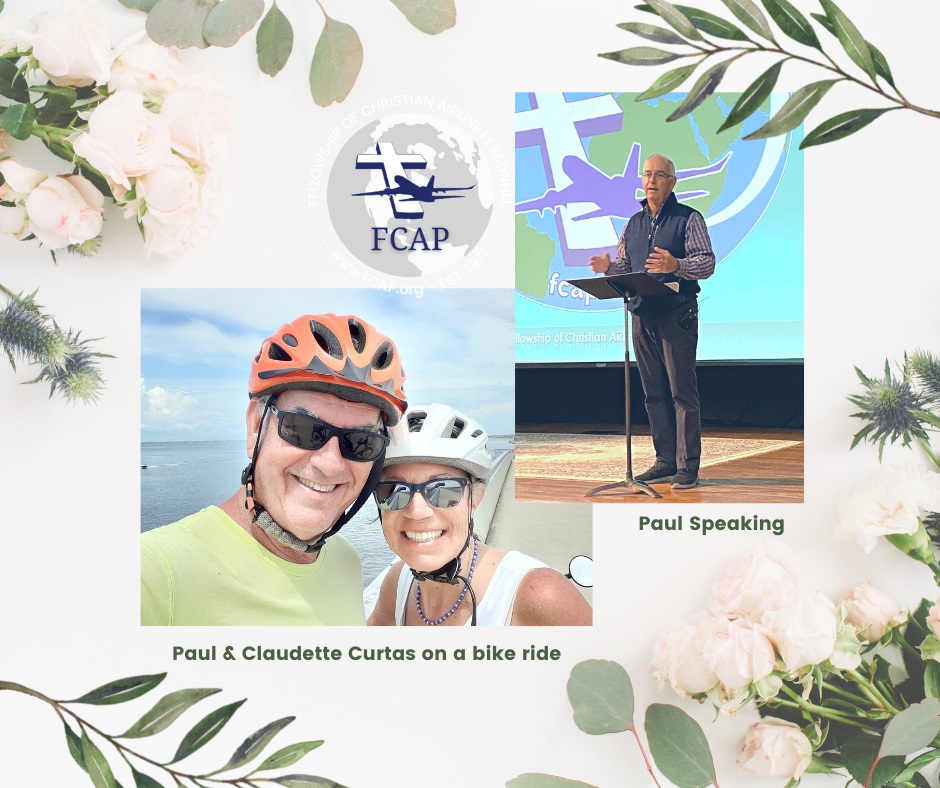 Over the years Paul and his wife Claudette have worked as a team in FCAP, traveling the world and visiting and ministering to people as well as hosting many international people in their home. On their off time they enjoy riding bikes. The Curtas’ live in Brooks, in the Atlanta Georgia metropolitan area.”

We are so blessed by Paul and his faithful service to the ministry of FCAP for nearly 30 years!

Pictured above are part of the Nairobi team that came together for prayer on November 20.  They write, “We had a great time of prayer!  God moved in our midst so powerfully!  All glory to Him.  We must encourage our members to remain persistent in prayer.”

On the very next day, while Paul and Claudette were visiting with family in Virginia and attending church with them, they met a Kenyan pastor who is visiting the U.S.  Paul shared with him the above photo and learned the pastor has Kenyan Airways employees in his church. The pastor plans to connect with the FCAP Group in Nairobi upon his return.  The Lord truly does work in wonderful ways to connect His people!