OUT OF DARKNESS…INTO THE LIGHT

“Land of Zebulun and land of Naphtali, the way by the sea, beyond the Jordan, Galilee of the Gentiles — the people who sit in darkness have seen a great light, and on those who sit in the region and shadow of death, a light has dawned.”  Matthew 4:15-16

Light has dawned indeed. The incredible Light, Jesus Christ, has shone on our hearts, exposed our sin, and transformed us. We are free from bondage and have the power to walk in the newness of life. What a welcome proclamation! The Christmas season is short but one of great joy, a beautiful reminder of the advent of this Light. But the ultimate question deals with eternal things, so we must ask … Do you share in this joy, or do you remain in darkness?

In the text above, Matthew quotes prophetic words from Isaiah 9:1-2. Verse 15 of Matthew 4 describes where Jesus would carry out His ministry, and verse 16 tells us about the people in Galilee amidst their dark despair and points to the One who would present Himself in magnificent brilliance.  Who were these people, and why such darkness? What happened that had caused such misery and gloom to this population? We find the answer in 2 Kings. The people sitting in darkness were God’s people, and the darkness they sat in was a combination of their sin and God’s judgment.

We frequently read how the Israelites’ kings (whether Israel or Judah) “did evil in the sight of the Lord.” And even when we find leaders who “did what was right,” there were exceptions to it. Over many generations, the people had been led into wickedness and acted wickedly themselves. They continually broke the commandments of God, even despising the warnings given by the prophets. As a result of their sin, God would allow a foreign nation, the Assyrians, to carry out His sentence upon them.

The darkness can be further described by how God imposed His judgment. Elisha saw what was to come when he exclaimed to the Assyrian king Hazael, “I know the evil that you will do to the children of Israel: Their strongholds will be set on fire, and their young men you will kill with the sword, and you will dash their children, and rip open their women with child.” (2 Kings 8:12).

Many Israelites were uprooted and carried back to Assyria as slaves. From 2 Kings 15:16, we learn of Elisha’s prophecy coming to pass.  The Assyrians were ruthless and vile, and God’s punishment upon Israel was severe (2 Kings 19:17). The darkness spoken of was one utterly devoid of light, but God promises His people hope even as He offers salvation to the world.

The Light of the World

We read and sing the prophecy contained in Isaiah chapter 9 during Christmas. We do this because Isaiah spoke early and often of Immanuel, or “God with us.” This light we know to be the “great light” and the “light that dawned” of whom Isaiah was speaking. Because of the cruel depravity that existed in that day, Isaiah personifies Jesus as Light, a significant contrast to pure darkness.  Jesus proclaimed, “I am the light of the world. The one who follows Me will never walk in darkness, but will have the light of life” (John 8:12).

The Greek word for light here and in Matthew 4:16 is phos, from which we get our English word phosphorous, and means “light-bearing.”  What a perfect characterization of our Lord, as He is the only one able to expose the sin of a dark soul and then keep that soul from stumbling.  TCF

(This article was written by Tim Files, an Aircraft Systems Analyst with Delta Air Lines. Tim also serves as Secretary-Treasurer on our FCAP Board of Directors.)

In Pursuit of Peace 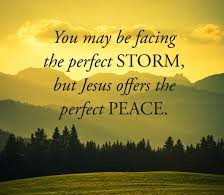 Our September issue of IN THE JETSTREAM, entitled “In Pursuit of Peace” and written by Jake Joseph, is now available.